All of us here at World of Golf New Malden would like to congratulate Gary Marks on a hugely successful year on the PGA European Seniors Tour this season.

Gary joined us as a teaching professional at World of Golf New Malden in 1992, back in the days when we were called Beverley Park.  While the rest of us could claim that those that can, do, and those that can’t teach, Gary was the one that really could do both. He was a huge hitter of the golf ball and was a very large fish in the small pond that was the local PGA South Region events, regularly cleaning up the pro am prizes. But making that next step onto the European Tour and playing with the big boys always eluded him.

On meeting his future wife, a Polish lady, he went to meet the relatives in Poland and it just so happened that The Polish Open Golf Tournament was on the same week, so it was natural for Gary, and extremely understanding of Monika for him to play, and what do you know, he only went and won it. At that time there was a USPGA Tour event called the Sarazen World Open whereby a winner of any national Open golf tournament in the world was invited to play at Chateau Elan Golf Club in Georgia on the main PGA Tour in the States.

Gary took the invitation and travelled across the pond, now a real minnow in the largest of Oceans, the PGA Tour. Expecting to be gobbled up like plankton, Gary actually ended up the top European with a top 10 finish, playing with and beating Mark Calcavecchia who was The Open champion at the time, an incredible feat.

Gary can play this game and finally he managed to get his European Tour card at the infamous Qualifying School and this looked like the break that he needed to fulfil his immense potential. But a terrible freak accident during the off season prior to Gary taking up his European Tour membership stopped him from being able to play the next season and the chance was cruelly stolen from him.

With getting older his golf game did not wane at all, he continued to boss the small pond of the PGA South Region and finally as he turned 50 he became eligible for the European Seniors Tour. Making the trip to the qualifying school was fairly successful first time out although a disastrous final round took Gary down from 2nd place and entry into every tournament to a lowly position and restricted access to playing.

So when he finally got his full playing privileges for the 2016 season it was a long awaited, well deserved chance to make his mark, if you will pardon the pun. He has made the most of this, and some, with some high finishes including winning the Willow Senior Golf Classic at Hanbury Manor over the August Bank Holiday. He now lies in 9th place in the order of merit with over €100,000 in winnings and is now eligible for the end of season Tour Championship at the gorgeous Belle Mare Plage resort on the beautiful Island of Mauritius.

This is truly a story of it has taken a lifetime to become an overnight success. If anyone deserves this great end to their career, it is this man. He is so unassuming, modest and has been incredibly unlucky many times over the years. Today he has a beautiful family and the notoriety that his talent warrants. I for one, am proud to have seen this late flowering and hope he continues for many more seasons to come on the great pension fund that is the PGA European Seniors Tour. 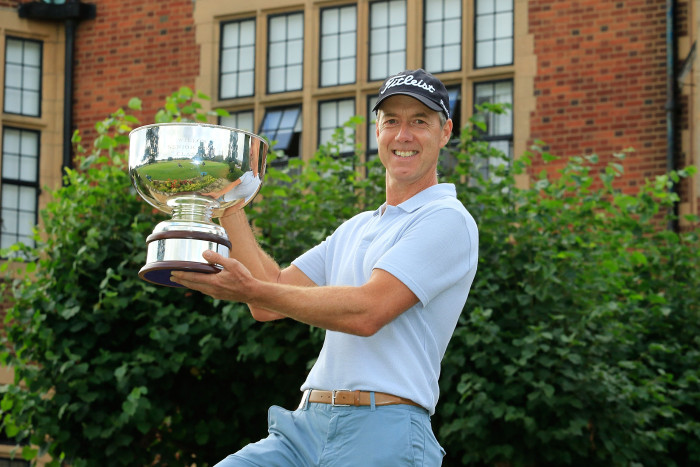 Marks started the final round with a commanding five shot lead, but was pushed to the end by his playing partner James Kingston at Hanbury Manor Marriott Hotel & Country Club.

Winner of this year’s Senior Tour Qualifying School, the 52 year old’s best result in 2016 had been a tied 18th finish at the SSE Enterprise Wales Senior Open before taking victory in Hertfordshire with rounds of 67-63-72.

“It’s the greatest day of my golfing life,” said Marks. “The strength of the field here was great, and you might have a friendly game with one of them and beat them, but I beat them all and I’ve won a major event, it’s one of the biggest events on the Senior Tour.

“This season, I’ve been up the leaderboard and then falling on a number of occasions. The Senior Open at Carnoustie was important. I put in two 70s and finished level par. Because of the scale of that event, it gave me a little extra strength.”

Marks needed to draw on that strength on the back nine as a double bogey on the par four 13th hole saw his lead reduced to four shots with five holes to play.

“It was difficult to cope with mentally,” he said. “I had a seven shot lead with the back nine to play, it suddenly got quite difficult. I had a penalty stroke and started to lose my swing a bit, it was quite tough getting over the finishing line.

“I had a four or five shot lead, but then I had another bogey after that and in your mind you start seeing things unravel, you start seeing ridiculous things. In the end, I hit enough decent shots to cross the line.”

Australian Mike Harwood went two better than his result at the Prostate Cancer UK Scottish Senior Open, as he backed up his fourth-place finish at Archerfield with a second place at Hanbury Manor, finishing 12 under par after a final round of 68.

Kingston, who made his Senior Tour debut earlier this year after turning 50 last November, recorded his best finish on the over-50s circuit, tied third on 11 under par.