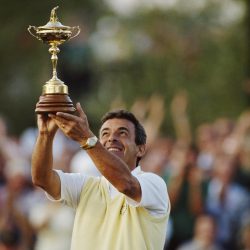 Tony Jacklin was in his pomp at the time I began playing in 1971 and was a huge influence on the game and on me. He had won The Open in 1969 and followed this by winning The US Open the next year, the first British player to do so since 1920, and he didn’t just win the tournament, he murdered the field winning by 7 shots. So anytime golf was mentioned in my early years of playing, Tony Jacklin was the mark of British success that everything and everyone was measured against.

My first quality set of golf clubs was made by Dunlop and they were Tony Jacklin Stainless. This was in the age when golf clubs bore the name of the top golfers of the day. The simple idea was that they could make you play like the name bearer! Nowadays clubs are a mixture of letters and numbers with precious little relevance to anything. Back then you either had Jack Nicklaus Golden Bear, Tom Watson Ram or Johnny Miller Slazenger clubs. I was firmly with Tony and his Dunlop blades.

As my career progressed, Tony’s began to wane. The year I turned professional was the same year he won his penultimate tournament in Germany. But as we all know, he then went onto, perhaps some would say, his most important contribution to golf: masterminding the European Ryder Cup victory at The Belfry in 1985.

I may have turned professional thinking I would be the next Tony Jacklin, but I soon learned that, for many reasons, my golf game was not going to support any kind of living. So I turned to golf coaching. The difference to my life, that winning the Ryder Cup under Tony Jacklin’s stewardship made, was significant. Suddenly throughout the mid eighties and early nineties, everyone was interested in learning to play golf. As a specialist in beginners golf, I was in the front line of the surge in interest and times have never been better.

So from me it is a huge thank you to Tony Jacklin: great player and master tactician.